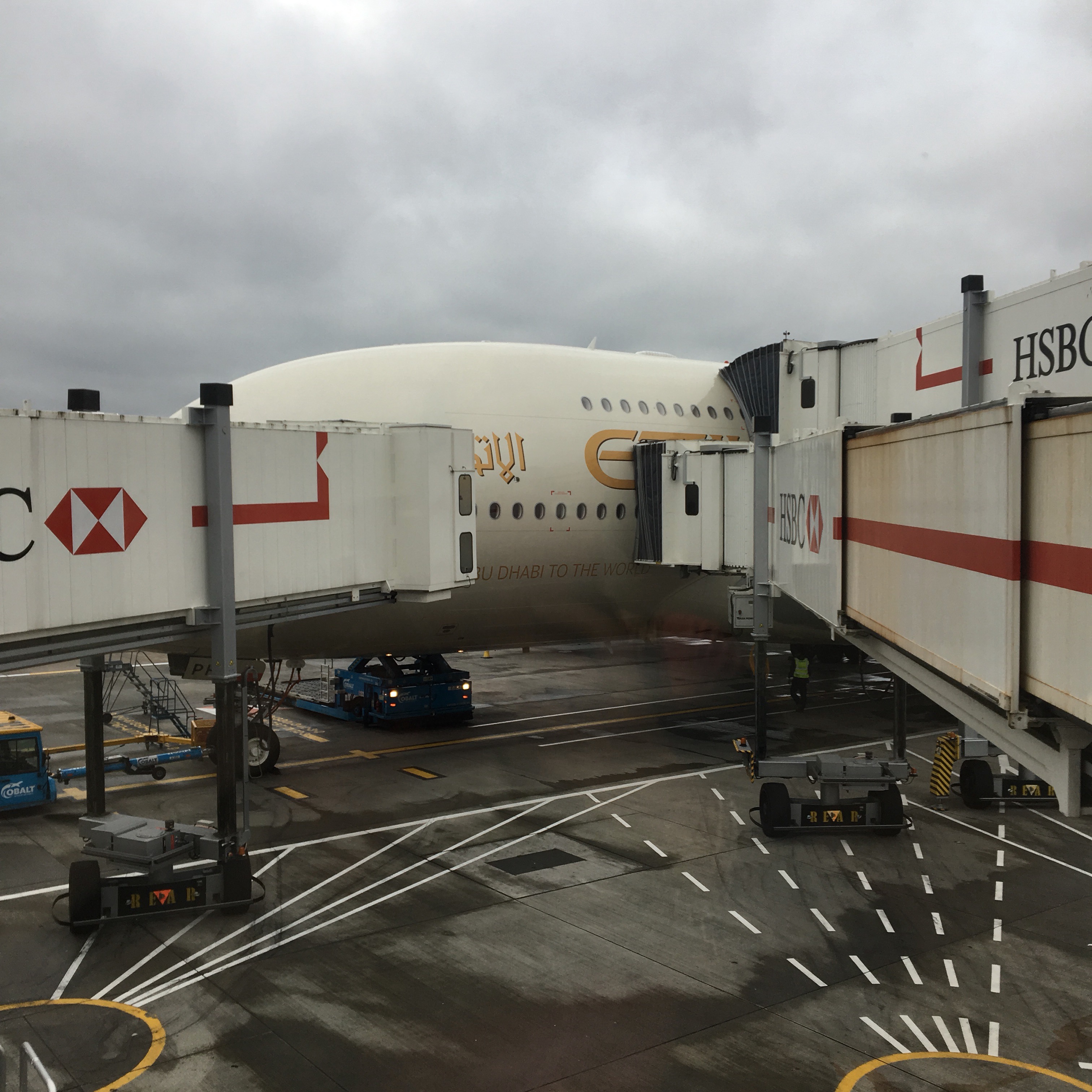 Well, I actually managed to leave the country this time. Greetings from Abu Dhabi international airport, which means one (mid-length) flight down, one long flight to go. I’ve lost count of the number of times I’ve flown to Australasia and I’ve sampled most of the airlines that offer London to Sydney via one stop, but Etihad is a new one on me. Today it seemed mostly to be carrying cricket fans bound for Brisbane and folks working at this weekend’s Abu Dhabi Grand Prix – lots of Pirelli luggage and Barmy Army shirts in evidence.

The only con of Etihad I’ve found so far is rigorous enforcement of a paltry cabin baggage allowance (7kg, it turns out, is a wheely bag less than half full!), which led to some frantic re-packing in the corner of Terminal 4. Since the big suitcase was already a couple of kilos over the 23kg allowance, I shoved as much as I could into the big rucksack and my handbag, ridiculously put on my raincoat for check-in and then rearranged the hand baggage into something sensible (and well over 7kg back in the wheely) as soon as I had the “approved” cabin baggage label. Phew. Still, more than I’ve achieved before 9am on any other day in the last fortnight!

Other than that, so far so good. Landed 40 minutes early, empty seat next to me a big win, Lego movie enjoyed, red wine deemed acceptable and the coffee too (just about! I long ago gave up on aeroplane tea being anything other than vile), and food went down pretty well. I reckon all serial long-haul economy class flyers have their own routines and coping mechanisms. Mine, ingrained as a teenager who found 14-hour flights interminable, is to draw every activity out to make it take as long as possible. Multi-tasking is missing an opportunity to pass more time with the same stuff. If I’m feeling adventurous, I’ll listen to music and play a game (or write a blog post) simultaneously, but I religiously won’t do anything else while eating and certainly not watch a movie. Movies are for after the meal, it’d feel wrong otherwise. Yep, I’m weird!

An hour until I board flight 2 of 2. Another Etihad bonus is the ability to bid for an empty seat next to you on less-than-crowded flights, and I thought £105 worth it for 14 hours of what should be improved comfort. After a conversation with customer services yesterday, I’m greedily holding out some hope of three seats to myself. Til then, a (vastly better than Etihad) coffee and internet catch-up are keeping me sufficiently entertained. Yep – multi-tasking is “allowed” on land….

View all posts by trainstimtamstestmatches